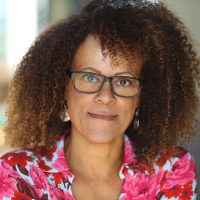 British writer Bernardine Evaristo is the award-winning author of eight books and numerous other works that span the genres of novels, poetry, verse fiction, short fiction, essays, literary criticism, and radio and theatre drama. Her writing and projects are based around her interest in the African diaspora. She is Professor of Creative Writing at Brunel University London.

She guest-edited the UK Sunday Times Style magazine in July 2020 with a black women & womxn take-over, and she has edited several other publications. Her literary criticism and other writing has appeared in many national newspapers and magazines including the Guardian, Times Literary Supplement, Observer, Times, Independent, New Statesman, Vogue, Harper’s Bazaar and Conde Nast Traveller. She has also judged many literary awards and is on the Editorial Board of the African Poetry Book Fund (USA) for all its publications and prizes.

Since 1996 she has accepted many invitations to undertake international visits as a writer. She gives readings, talks, delivers keynotes, chairs panels and delivers creative writing activities and courses. In 2019 she was the inaugural Woolwich Laureate, appointed by the Greenwich & Docklands International Festival. She is reconnecting to the home town she left at eighteen and writing about it.

The first monograph on her work, Fiction Unbound by Sebnem Toplu, was published in August 2011 by Cambridge Scholars Publishing. A second monograph by Ester Gendusa was published in Italy in 2015. Her books have been, or will be, translated into nearly 40 languages.

A staunch and longstanding activist and advocate for the inclusion of artists and writers of colour, Bernardine has initiated several successful schemes to ensure increased representation in the creative industries.

Personal
Bernardine Evaristo was born the fourth of eight children, in Woolwich, south east London, to an English mother (of English, Irish and German heritage) and a Nigerian father (of Nigerian and Brazilian heritage). Her father was a welder and local Labour councillor; her mother was a schoolteacher. She was educated at Eltham Hill Girls’ Grammar School, the Rose Bruford College of Speech & Drama, and Goldsmiths, University of London, where she earned her PhD  (Creative Writing). She spent her teenage years at Greenwich Young People’s Theatre, which was where she first became involved in the arts.

She lives in London with her husband.